After a very exciting summer (that has further contributed to my own absence from this year blog), I am finally going to the beach this Labor Day weekend.  But in an attempt to live like its summer all fall long, we're tackling the top 9 TV beach bods for this summer's TV Top 9.  I'm glad to welcome two guest blahggers -- Dana C. Gravesen, and Linde Murugan -- who have filled the void of my co-blahgger Arielle, who saw this whole vain thing as below her. To that I say -- Let's hit the beach...

In the long list of straight-forward sexy white jock boys, Dan Cortese stands out as the only one to star alongside Kirstie Alley on the small screen. Cortese's turn as Perry in Veronica's Closet allowed him to strip down from time to time as a worker in Veronica "Ronnie" Chase (Kirstie Alley)'s lingerie office. Cortese got his sexy clothing-lite start on MTV as one of the lead correspondents for MTV Sports in the nineties. His talent as a smiley good-looking presenter has landed him recently on the shows Crash Course and Money Hungry.

Sure, China Beach was set during the Vietnam War, only lasted three-and-a-half seasons, and was a medical drama. Not sexy. Not sexy at all. BUT WAIT: Dana Delany's Nurse Colleen managed--despite her strange (even for the late-1980s) hair--to make the beach scenes sizzle (in a red bikini, no less--the characters on Grey's Anatomy could learn a thing or two from China Beach). Delaney found the defining role of her career as McMurphy; Colleen's "everyday woman" appearance, dedication to her job (she stayed in the war even though she was eligible to return home), and straightforward, tough demeanor allowed her to navigate both the forward advances of her colleagues as well as the deep waters of the war. Maybe not altogether sexy, but definitely stellar.

Surf dudes with attitudes, kinda groovy? You bet! And no one was hotter than Sly. Yes, he may have been the most annoying and sleaziest, but could you say no to this bod? In "The Fashion Man," Sly reveals his six-pack, and the in-studio audience squeals. Furthermore, what makes him worthy of our accolades is that the dude is still a babe after all these years, causing me to squeal a bit, when I saw him on the show's reunion on Late Night with Jimmy Fallon. You're not dreaming. He's just that great. 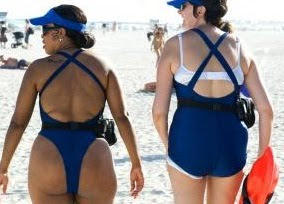 While the silly coppers only got the prime opportunity to show off their beach bods when they took to the big screen for Reno 911: Miami, seeing each cop in their perfectly characteristic beach get up in the film reinforced what made the characters so damn lovable. Though their beach bods couldn't save the film, seeing Raineesha (Niecy Nash) in that extra large suit, Clem (Wendi McLendon-Covey) strut her stuff, Lt. Dangle's classic short shorts and Trudy Weigel (Kerri Kenney-Silver) attempt to pad her suit in an attempt to hide her frumpiness, we were reminded what made us fall in love with these characters, who belonged on the TV, in the first place.

Though many have played this character in films and tv specials, it was the adorable Field, who will be the best 'gidge' (a nickname her boyfriend Moondoggie gave her). FYI: Gidget = Girl + Midget. Though this equation might not describe the hottest babe, Gidget was the epitome of a beach-ready bod because of her love of surfing. The show presented an active female body, competing with the boys, getting into trouble, but of course staying a "good girl." Still, whatever "proper" version of adolescent femininity ABC was trying to sell in 1965, anyone can appreciate cute-as-a-button Field in some stylin' bikinis, even if she never 'actually' surfed.

4. Zach Morris (Saved by the Bell)

When I wake up in the morning and my clock gives off a warning, I don't think I'll ever make it out on time to see "Cali Dude" Zach Morris shirtless on Saved by the Bell. We all know What'shisface Lopez was the show's "jock" figure, but Gosselaar's Morris was as charming as he was sleazy, and between the bleached blond hair and single eyebrow raises I could barely contain my adolescent hormones when Saved by the Bell debuted HOUR LONG episodes featuring the Bayside gang working at a beach club. Swim wear? Check. Volleyball? Check. Treasure hunts? Check. Leah Remini? Check. Wait wait wait--scratch that last check: that chick needs to get out of my mind's eye so I can go back to thinking about licking zinc off of Zach Morris's nose.

At the beginning of the Lost episode "What Kate Did," a shirtless Jin emerges from a tent, revealing a gorgeous set of abs and tan skin to a very-impressed audience. Though the scene is a tender moment between Jin and Sun, after being estranged from each other for some episodes, it really solidified Kim as a sex symbol. Though Matthew Fox and Josh Holloway may have fans swooning all over them, they cannot compare to the hotness that Kim brought, and continues to bring to the beach. Check him out this fall in the CBS reboot of the classic Hawaii Five-O. Along with featuring more Asian actors than the show from the late '60s, the O of the original has been substituted with a zero.

The appeal of David Hasselhoff isn't immediately apparent. In fact, I'm not even quite sure it's apparent at all, no matter how much you look for it. But the man with questionable morals and impeccable green screen skills singlehandedly anchored the quintessential sexy beach show, Baywatch. After the show was canceled at the end of its first season, Hasselhoff and a few others got together to save it and allow it to become one of the most watched (maybe the most successful) television shows in the history of the world.

Ginger might have been sultry, but think of how many times she reused those same fake eyelashes and wigs on Gilligan's Island—that's an infection waiting to happen! The real beach bombshell of Sherwood Shwartz's mid-1960s megahit about a band of misfit castaways was Dawn Wells as Mary Ann Summers. Kansas-bred Mary Ann was smart, sweet, and gorgeous--a deserted island Dorothy Gale for the ages. Summers brought genuine charm to what could have been a very one-note role. And whenever she donned a swim suit? (Where did they get so many swimsuits??) RAWR.

Other People Worth Reading