Giving Queer Programming a Reason for Being: Notes on Wildness

As a queer film programmer in the twenty-first century, I am constantly asked if what I'm doing is needed anymore.  I am also advised by many to get myself out of a sort of career gay ghetto.  Identity politics -- the power of the illusion a homogeneous population of minorities (gays, blacks, the disabled) -- is on its last legs.  And identity politics framed as such, apparently, are the only way of seeing things like lesbian & gay/LGBT/queer film festivals.  As my slashed list of adjectives reminds us, the nomenclature of a bygone era sometimes is still stuck to these institutions.  These vestigial adjectives are evidence for all too many people that what I have done for NewFest for the past four years -- and what I intend to do for a good many more -- is no longer en vogue, irrelevant even.

There are two common defenses for what NewFest is doing, and, in fact, these excuses are very nineties themselves:

Some insist that we still haven't hit the mainstream.  They are obsessed with LGBT folk entering into the media mainstream.  While I have no qualms with the accusation that Hollywood and all of the culture industries are overwhelmingly dominated (still!?!) by straight white dudes, I'm unsure of what to do with the proliferation of Ryan Murphy products on my television, the availability of Almodovar films, the adaptations of Jeannette Winterson novels, the fanaticism around Drag Race.  All these things -- diverse and (sometimes) lovely as these things may be -- don't really excite me.  Some out and proud queer is on the cover of a magazine?  Great.  But are we ever really happy?  When have we achieved the threshold of proper representation?  Is this a quantitative or qualitative question?  The fact is we can't measure this in any useful way.  We are bound to be disappointed until we reach a point where being queer becomes irrelevant.

Others insist that queer arts organizations should show off new ways of being -- that the pleasure in being queer is in being different, being inventive.  If we rely too much on this, any gesture towards "settling down" or "normalizing" is unattractive and potentially isolating within a certain queer context.  Where's the productive, optimistic, communitarian affective power in castigating those who -- darewesay -- fall in love and partner up?

Of course, I have no will to fetishize the normal, but I see no need in fetishizing the queer either.  I also see no need in quantifying our queer media content.  The true value in a queer film festival, for queer arts, for queer culture, for queer pleasure.  Is somewhere in between being visible/seen/acknowledged as part of something and as participating in a set of practices that lies outside of the oppressive.  The majority of us queers, I would think, hope to be both a part of something and individuals.  This is a common set of human desires. 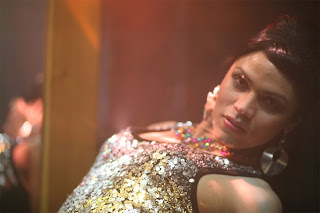 About thirty minutes into Wu Tsang's Wildness I realized I was watching something quite special.  The film tells the story of Wu's participation with some friends in a cosmopolitan young party, Wildness, at Silver Platter, a Latina tranny/lesbian bar in the Westlake neighborhood of Los Angeles.  A group of Latina/o queers dominates Silver Platter for much of the week.  On Tuesdays, Wu and his friends throw Wildness, and the bar's usual clientele integrates with the party's racially diverse crowd, a relatively socioeconomically privileged set of mostly college or college-educated young people.  Wu and his friends define the party with a weekly performance element, and the community the party brings to the bar is interested in respecting the community standards established by the bar's regular clientele.  Wu, though, is self-reflexive from the beginning about his party's intrusion on an established cultural place.

At a certain point, Wu's introspection about the way that his identity as party promoter was intersecting with his identity as young trans Chinese-American dude,  community liaison, community member, and historical documenter struck me and spontaneous tears appeared.

I'm disappointed with my synopsis of the film thus far; a couple decades of queer theory skittishness has made us afraid of the language I have so far used.  It's hard to explain how profoundly important points like the one this film makes can possibly be done in a way that is not over-intellectualized or obfuscated into abstractions.  I can say that the film was able to succeed on these levels only because Wu so clearly lives his life with great humility and respect for a variety of communities -- those which he happens to encounter and those in which he lives.  There is also a profound respect for people.  Period.

A respect for the human, to my mind, goes much further than any quest for representation GLAAD is pushing for.  And there is no need to imagine an affectively pleasurable queer future; there is already -- albeit ephemeral -- a sense of cross-class, multiethnic, cross-generational community.  These relationships are surely queer in the way we commonly use the word, but they also come easy.  They are obvious to those involved.

All of these possibilities are visible in Wildness:  a diversity of individuals and the communities they form.

Wildness is the most important document of contemporary urban queer life.  It is a work of art -- a work of a community and the temperament and love of the individuals in it.  It is often surprising when the film exits the confines of the Silver Platter, but one understands that the affective exchanges within the bar are so significant only after a number of circumstances that persist outside of the bar prove the strength of the Silver Platter ties.

Luckily, Wildness also documents the end of these feelings; one feels the moments in which the realness is sucked out of the air.  This is lucky because utopias can't persist.  The earthly conditions aren't right for Utopia.  Nearing Utopia and falling back down is an immensely powerful journey, and through a set of storytelling apparatuses that gives viewers access on various registers, including a device that allows the bar to talk in a composite of the voices of its regulars, there are a number of opportunities for viewers to be compelled on this ride.

Though I arrived to the screening of Wildness alone and left alone, I took great pleasure in seeing it with so many queers I respect and admire, even love.  And though they may be "normalized" in a way (many of them, after all were there with partners/husbands/wives; fuck it, I'm pretty normal in many ways), I became all the more sure there's nothing really wrong with that.  For us queers (and I'll use that term as loosely as you'll let me), various communities intertwine and intersect; we are sure of each other as individual assemblages of feelings and identity and we place great importance in our participation in variously structured communities. 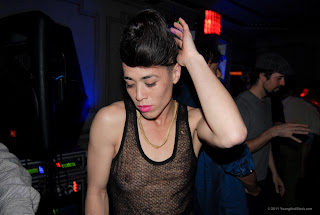 All of this is a long-winded way of saying that I'm excited to return to NewFest.  It's a way of saying, too, that I'm of the mind that if you're providing an experience the community wants you don't get questions like "Do we NewFest anymore?"

There are works of art and structures that support queer art that are thriving today like Wildness once was, and these entities certainly don't need to justify themselves.  I'm thinking here of the Dirty Looks film series, Little Joe magazine, Original Plumbing magazine, Pussy Faggot, MIX Queer Experimental Film Festival, QuORUM-- all organizations that run with the help of a collective spirit, a community of like-minded, invested queers.

In my case, I've been working for an organization I see potential in.  I've seen NewFest do things I'm really proud of, but it's really not working hard enough to make its purpose self-evident (most notably for the donors that need to financially run an arts organization our size).  I'm nearing the point where going through much more bureaucracy might make it not worth its while.

NewFest, like Wildness did for Wu, might slip out of my hands because I become indifferent.  I hope that's not for a bit.
Posted by bryce j renninger at 8:50 AM 1 comment:

Other People Worth Reading